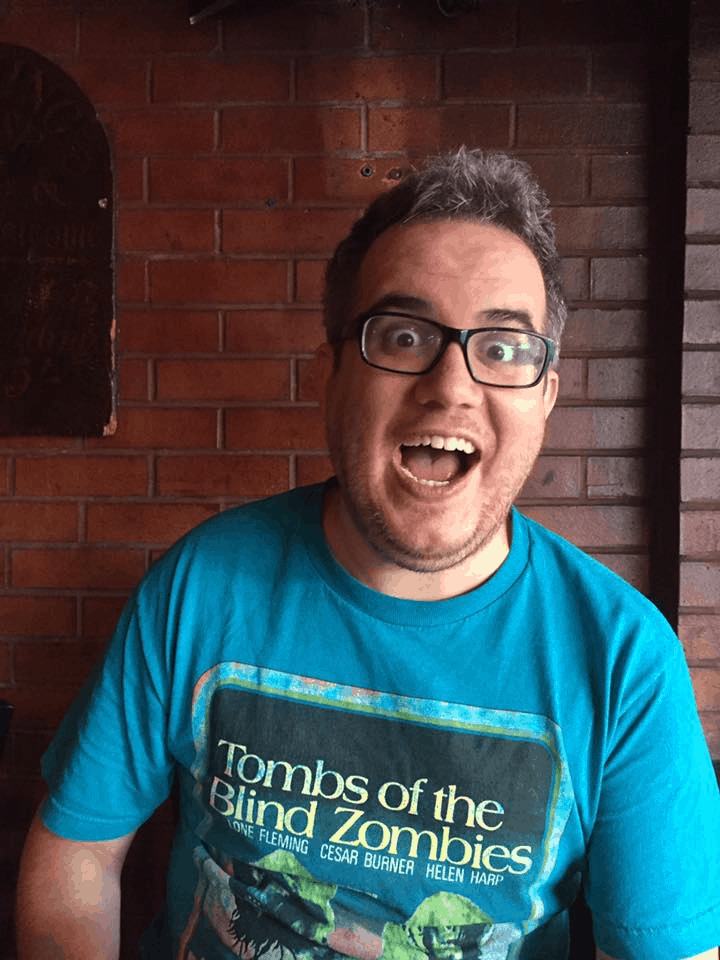 It’s been a few years of movie making madness with myself and Justin Decloux. We started out with an experimental film called Ghost Scare and ramped up pretty quickly to finishing Teddy Bomb together, making lots of short films and finally culminating in our most recent project, Impossible Horror. We spend a lot of time talking about our passion for filmmaking and why we’re doing it, and how it hasn’t completely destroyed our brains or even our relationship so far. I personally consider myself quite lucky for that!

For me, Justin = Indie Film Inspiration. Also, a lot of fun.

If you have your own questions about the film, get your tickets for the world premiere of Impossible Horror on Monday, October 16 at 9:30 p.m. at the Scotiabank Cinema to see the film and meet the cast & crew at the Q & A after the film!

J: Thanks! That jokes never gets old.

E: That’s why you love me. So tell me, Justin – why did you decide to make a film? Aren’t films, like, hard to make?

It all seems so easy when you start! You write a script, you plan out the shooting blocks (when it seems totally manageable to shoot all nights for three weeks!)  and you sit back and go “We’ll have this all wrapped up in a few months!”  I really should have paid more attention to the fact that I was telling the story of a creative people driven insane from the impossibility of finishing their art.

The film turned my hair white! (Editor’s Note: No, it didn’t. His hair has been white since he was 17)

But it did turn half my beard white! (Editor’s Note: Can’t argue with that)

E: What inspired to make a spooky movie with ghosts?

J: My last feature film TEDDY BOMB was an all out go-for broke action splatter comedy in the style of my favourite Hong Kong directors like Tsui Hark and Ching Siu-tung, but for IMPOSSIBLE HORROR I wanted to scale things back a little, and take inspiration from an unlikely place – Japanese horror films, especially the straight to video ones (A.K.A V-Cinema). The sub-genre has such specific rhythms and moods and it’s actually the antithesis to the style I usually gravitate toward – loud, big and in your face – so I thought it would be an interesting challenge to try to tell a story in a calmer mode – to a point (which you’ll understand when you see the film) I obviously riffed a lot on the work of Hideo Nakata and Kiyoshi Kurosawa, but the anything goes feel in the back half was directly powered by Takashi Miike and Sion Sono, two filmmakers that do everything simultaneously: Comedy, horror, drama, tragedy, and action often all appear within the same five minute span.

E: I heard you say you were also inspired by Lovecraft. Can we expect cool tentacle monsters!!!??

J: Well, I would temper your expectations of crazy monster action, but it’s true I was fascinated with Lovecraftian idea of a force so beyond human comprehension that it would drive a person to madness. I knew I couldn’t afford to build giant creatures, so I honed in on the horror of his creations. Plus, Lovecraftian insanity is all over J-Horror, so it was an easy fit. The toughest part was trying to balance the threat of an indescribable destructive presence and giving the characters goals and growth they can achieve. It helped once I figured out that the whole thing was going to hinge on struggling creatively.

E: Why a story about a filmmaker? Isn’t that a little narcissistic?

J: As a person who lives and breathes movies, I have a knee jerk reaction to wanting to tell stories about films and the art that surrounds them, which I realize is incredibly selfish, but it’s what I know! I didn’t want to make a ‘woe is me! How difficult it is to direct!’ story, but I did want to trace someone’s obsession with the art and how it shapes their life in an almost insidious way. The first few drafts were much obsessed with the concerns of making a movie, but with my co-writer Nate Wilson, we shaved some of that off to speak more universally about being creative. The filmmaking angle did allow to experiment with how I could tell the story as well.

E: Yea! About that! I saw there was some found footage style scenes in the film! What’s up with that?

J: I’ve always found that Found Footage was a stylistic form that had a lot of fun cinematic potential, so I really wanted to play in a sandbox that was fixed and technically simple, but it proved to be some of the most difficult things to shoot! You can write “They wander around in the dark of the woods,” very easily, but then you’re faced with the reality of finding woods in the middle of nowhere where the only light comes from a battery powered flashlight (that’s dying), your crew wonders who will be murdered first, and then it starts to rain.

The found footage element, which we shot on a T2I, also lead me to expand the film into a bit of a multi-media project with footage shot on phones, laptops and VHS. The only thing we didn’t use (which was in the script!) was Super 8 – cause $$$.

E: What was the hardest thing to do?

J: Props! Holy molee! What a pain in the butt! I would recommend writers rethink making a film that has 100+ props.

Truthfully, the shoot was extremely hard, mostly due to working nights and having a tiny crew, but we eventually got through it because we literally had no choice. Now, post-production was a whole other matter, as every technical problem we could possibly have (and some I didn’t even know existed) crushed my heart on a daily basis.

I have never felt more stressed in my life.

Thankfully, the two leads (Creedance and Haley) were extremely understanding and showed up whenever we needed them. The co-writer and producer Nate Wilson offered essential advice in shaping the film in post (while watching cut after cut), the cinematographer Aidan Tanner was always there to shoot more inserts, April Etmanski did all of the color on the film and Colin Cunningham saved my bacon with his invisible visual effects magic on two dozen shots that I assumed I was going to have to cut.

But most important of all, my partner Emily Milling carried the entire project on her back from start to finish. There is no way in hell I could have done it without her. She produced the film, she did the scheduling, she did catering, she did the makeup and special effects, she did all all the sound design, she recorded all the ADR, she mixed everything, she wrote all of the music and she checked everyone else’s work – ALL WHILE WORKING ANOTHER FULL TIME JOB.

E: You’re TOO sweet, Justin! You make my heart melt into a gooey mess of blood and tears of joy. Last question – what would be the one lesson you’d want to share with other filmmakers?

You can’t do this stuff alone. You really can’t.