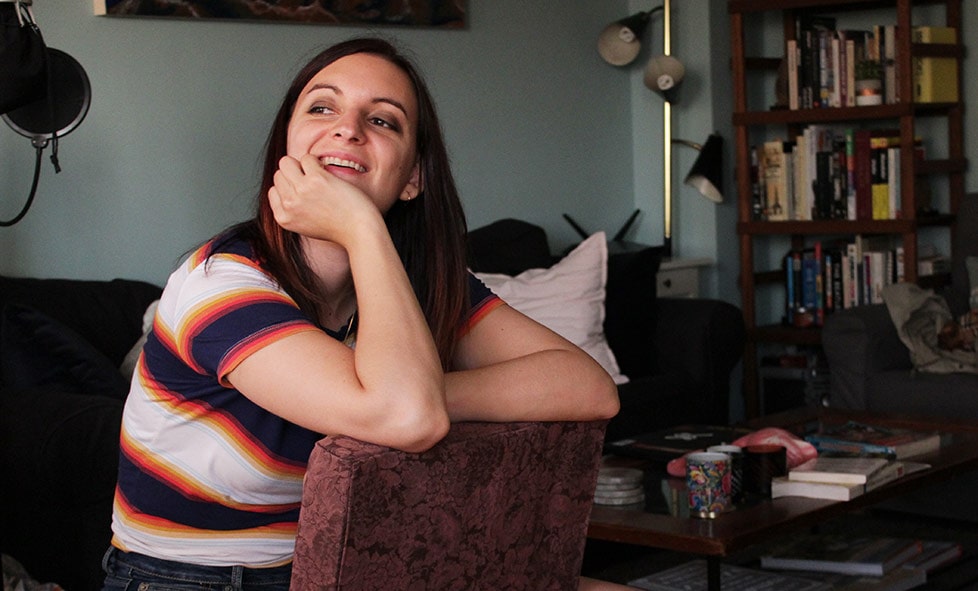 Meet April Etmanski, actor, colourist, foley artist and overall superstar for Impossible Horror which premieres at the Toronto After Dark Film Festival on October 16, 2017 at 9:30 p.m. She also happens to be one of my closest friends and a seriously awesome creative collaborator. April and I met in high school and acted in Fiddler on the Roof together in grade 11. We also made films together, including our pinnacle piece, an adapted version of Macbeth. Since then we’ve worked on different projects both together and apart, and we had the chance to work on Impossible Horror together over the last two years. April made a huge difference and was a constant cheerleader for the film, encouraging Justin and myself to keep working and get it done. Now, we’re planning a short film that will go into production in 2018.

So, what does it take to be an all-around talented film superstar? I had an interview with April Etmanski about her processes and ideas to find out.

A: Very well, thanks.

E: Thanks for taking part in this interview!

E: Some (me) might say that you’re one of the most crucial elements that brought Impossible Horror to life. You were part of the concept, the crowdfunding campaign, the pre-production, production, post-production and here you are in the final stretch as we start promoting the film talking about your experience. What was it about this project that compelled you to be involved and stick it out?

A: I found everything to be very exciting! I had very little experience with film productions before this. Working in the post world, I never really got to be involved in pre-production or shooting on-set. Making a movie with my friends seemed like such a fun way to spend my off-hours. Also, getting the chance to be involved with the creative process was such a thrill. Whether lending a hand on set or being involved with post sound and colour, I enjoyed every minute of it.

E: And what does the film mean to you?

A: Impossible Horror is a project that I am immensely proud of. I always tried to be a positive influence during the process, offering help and bringing optimism wherever I could. I think the end product turned out so well and I know that is because everyone involved came together with their best work.

E: You were both an actor and a production assistant on set. What was your experience like with both? How did you balance them?

A: On the days where I was acting, I tried my best to also be a production assistant as well. Sometimes it’s helping set up a scene, sometimes it’s just offering an opinion. Being a PA often means being ready to help with anything at any moment, and also when to stay out of the way. 🙂

E: And how was it to work with a small team on this film?

A: I liked working with a small crew a lot because it allowed me to observe the process. Being behind the camera while the cinematographer (Aidan) did his thing was pretty cool. We were also all friends, so the crew got along very well.

E: Moving into post-production you were involved in both the visual and audio elements of the film. Can you talk a bit about the different things you did for the film in post?

A: I did the colour correction and performed as a foley artist.

E: How did you come up with the style for the colour of the film?

A: The director (Justin Decloux) shot the film exactly the way he wanted it to look. Most of the film has these amazing moody shadows over everything, with rich greens and yellows popping up all over. So the look was already set. My job became just enhancing the look so the shadows were really dark but the colours still popped. It was also really fun because this was the first horror movie I have ever coloured. So I got to experiment with making the gory scenes look especially gross by adding green and blue tones.

E: And what was the process like working with Justin on the finishing touches?

A: Great! Once the look was set he pretty much let me do the whole movie. Very few revisions.

[bctt tweet=”We needed to duplicate walking on a metal surface, so we ended up using muffin trays. #ImpossibleHorror” username=”canmakep”]

E: Can you talk about the process for the foley work you did? How did you come up with some of the sounds?

A: For most of the sounds I foleyed we just tried to duplicate what was happening onscreen. So for the forest scenes we brought a bunch of dried leaves into the house. If I had to foley a character stumbling and falling, I would just do that in front of the mic. However, sometimes we had to get creative. We needed to duplicate walking on a metal surface, so we ended up using muffin trays. We also had one patio stone and that really came in handy! A small handful of gravel on that stone gave just the right crunchy sound for a lot of the footsteps.

A: I did foley for a few projects in college. There’s no secret to it. You just have to look at the action a few times and then do your best to match it. I guess I just love performing. I love dancing and things that involve movement. For Impossible Horror, I just went for it! It was so much fun.

E: Thematically this film deals with a lot of creative blocks. What’s your strategy for overcoming creative blocks? Did you face any while you worked on the film?

A: For me, I often have a hard time getting started. I procrastinate. But once I’m going, I can work for hours and get into the zone. I think it’s important to have a support system of people who encourage you to be creative. I think that helped with Impossible Horror. Our team was game every night.

E: Thanks, April! You’re a superstar! 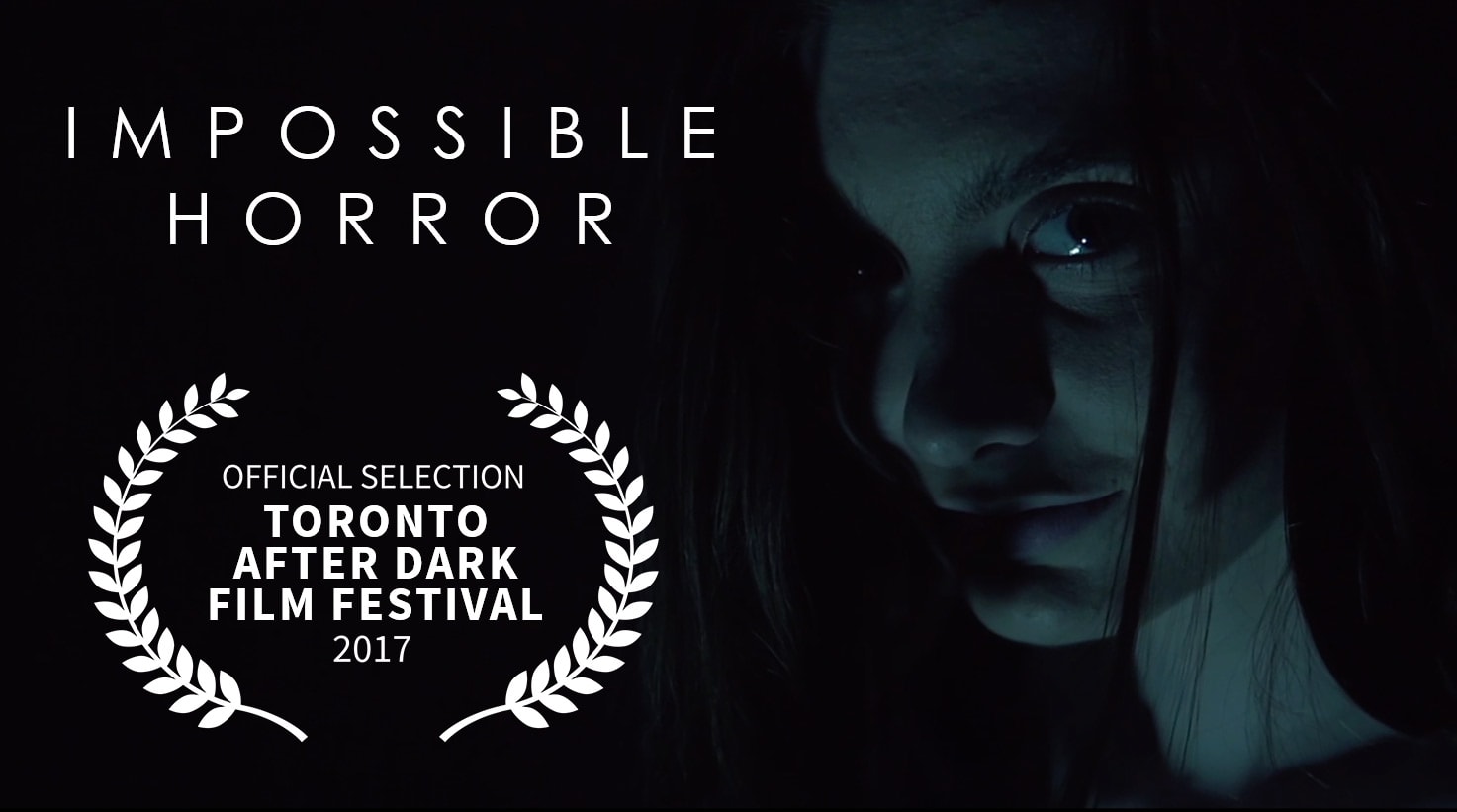 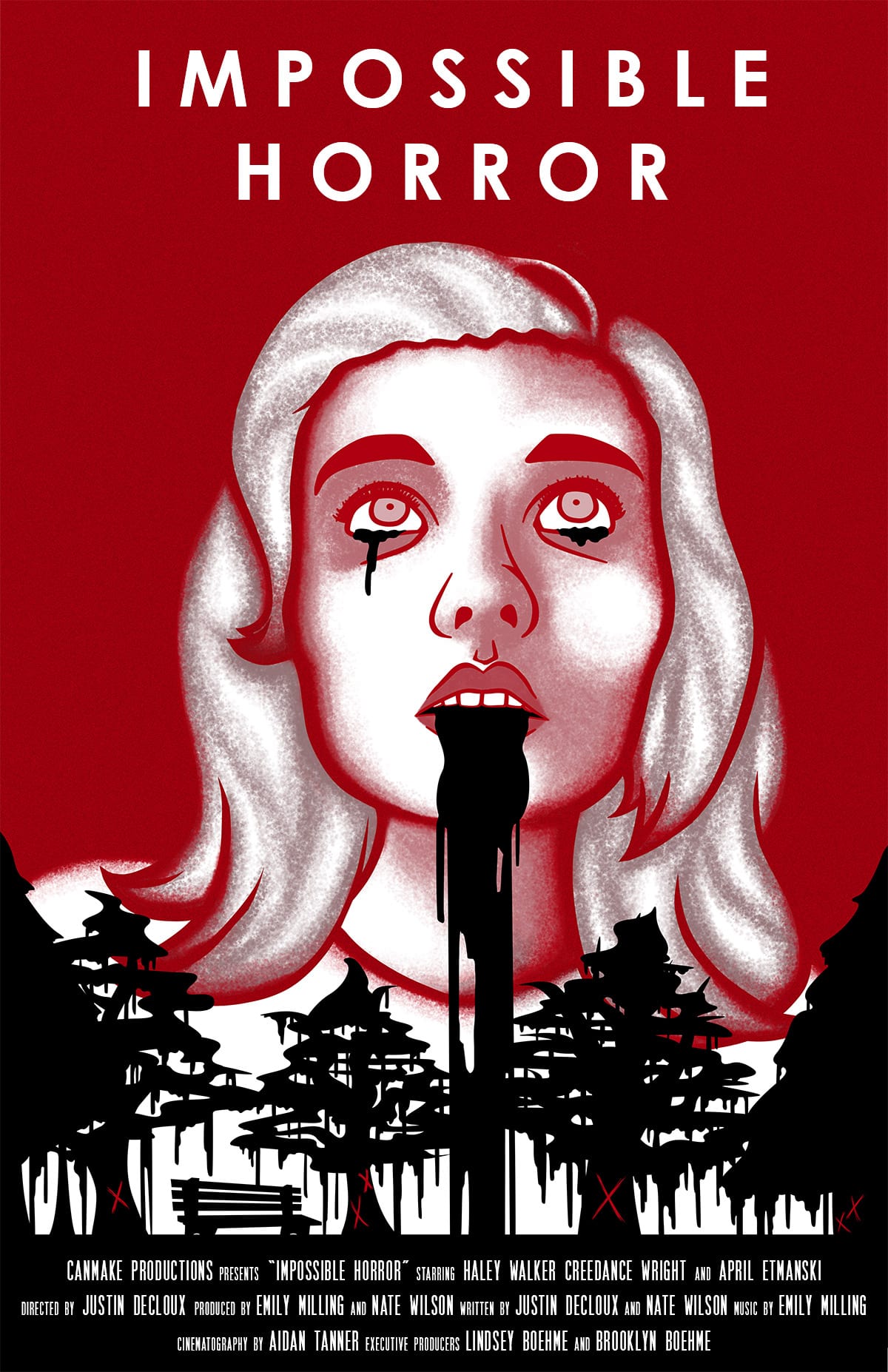 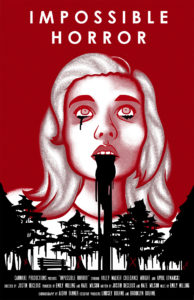