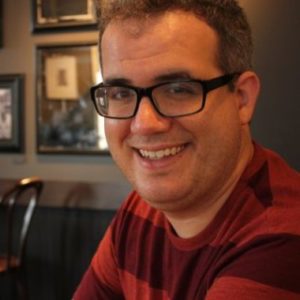 After moving to Toronto, he made the feature film “Teddy Bomb” a coming of age splatter comedy about a sentient talking teddy bear which screened at the Blood in the Snow Film Festival in Toronto. His short film “We’re In A Fight” premiered internationally in 2014 at the Feratum Film Festival in Mexico.

“Why do you want to make films?” is something that I hear all the time followed by, “don’t you have to be rich to do that?” and, “can’t you make a living at something more practical?” The cost of being creative is too high for most people. It’s an activity relegated to the weekends, when all of one’s responsibilities are completed, and the time for making art is clearly defined.

There’s no way in hell I can do that.

The need to create gnaws at me, burns hot in my brain juices, forces me to put pen to paper, pick up a camera, and tell the stories before they tear their way out!

I wanted to make a film about that struggle, but I know there’s nothing more dull, than watching an artist create art. It’s not particularly dramatic. It’s an internal process. At the end of the day, it’s pure narcissism.

But what if the passion was stoked by something external, something unknowable, something that could drive you insane? Something you had to capture.

That’s the story of IMPOSSIBLE HORROR.

Inspired by the aesthetics of Japanese horror, the anything goes cinema of Takashi Miike and Sion Sono, and the can-do attitude of micro-budget filmmakers, IMPOSSIBLE HORROR comes straight from my bloody heart. All of my frustrations, my loves and my fears, splattered across the screen as we follow two strong creative women that would do anything to catch a scream in the night. Even if it kills them.

Please don’t make me tell you what I did to get this film done. I only hope you enjoy it.