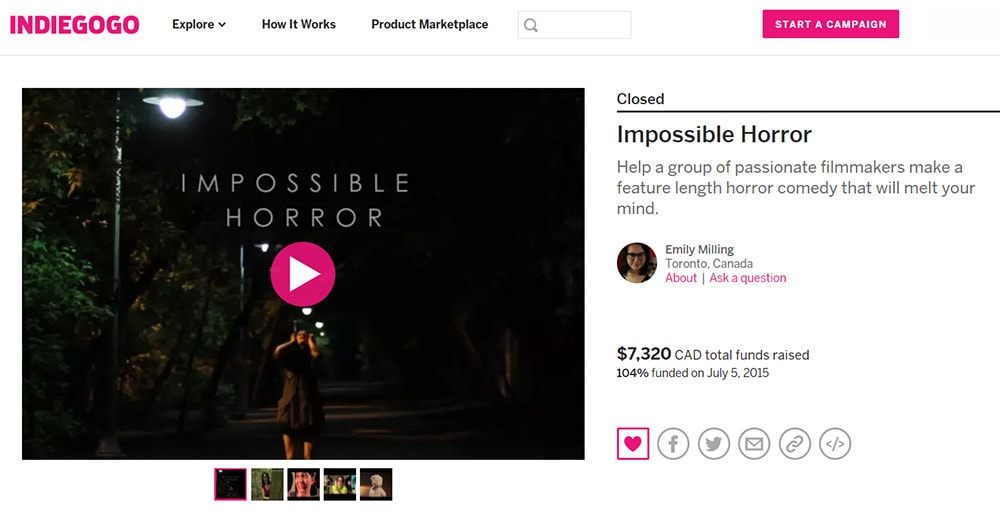 July 5, 2015 Toronto, Canada – In a dash to the finish line, Toronto indie film Impossible Horror achieved its crowdfunding goal of $7000, surpassing it with a total of $7290. The film is currently in pre-production, and will begin production on July 17, 2015.

“This is the outcome we were hoping for, successfully raising over $7000 is going to make this project possible.” says director/writer Justin Decloux.

Donors rushed to contribute in the final hours of the campaign. One contributor, Edmonton, Alberta native Lindsey Boehme, kicked in $1000 with six hours to spare. Boehme will be credited as an executive producer, joining her sister Brooklyn Leigh Boehme who also contributed $1000 to the campaign.

“We have a lot of people to thank for this, it really takes a community to rally around an idea and bring it to life.” says producer Emily Milling. “So many of our friends and family stepped up to the plate and encouraged their networks to get involved – we couldn’t have done this without them!”

The funds were raised on crowdfunding platform Indiegogo. Thanks to the successful raise, the campaign has now moved into the “In Demand” category, allowing for more contributions. Donors can receive perks exclusive to this campaign, including a special edition blu-ray with commentaries, a making-of featurette and more.

Every night a scream rings out in the same neighbourhood. Two insomniac strangers, Lily the filmmaker and Hannah the game designer, head out together into the darkness to find the cause. Is it a psychotic killer claiming a new victim? A murderous ghost out for revenge? A flesh eating monster? All of the above with extra chainsaws? Before they know it, Lily and Hannah have gone from being the scream hunters to the scream prey and an evil force wants them dead. If they can both survive the night, they may just find the answers they’re looking for, but the price will have to be paid in sanity and blood.